Nested Loops in C – How it Works with Example

By yourowncodes on 15th September 2015

Program Abstraction:    This tutorial explains the basic concepts of Nested Loops loops in C with examples.
We already leant about nested if-else statement in a previous lesson. Where, an ‘if statement’ contains another ‘if statement’. Like this, in nested loop, one loop contains another loop. It may be any type of loop, such as for, while and do –while.
Where we use nested loops?

Let us learn with an example: There are 3 students and a program which ask their marks in two subjects one by one. At first, student 1 was selected, and his marks in both subjects were accepted, and then second student elected and his marks were accepted and so on. Here first loop (variable i) select students one by one and entering marks in both subjects is by second loop. First loop has duty of selecting students and second loop has duty of accepting marks.

Here is an example code which accepts 2 marks of 3 stuents:
Output:

How the codes work?

Example 2: For accepting 10 students’ details. (Note that the accepting variable is a dummy integer)

Here first student is elected in first loop, and in nested loop his 3 details will be collected. if the first loop contains any extra statement than second loop, then should use an additional braze  {  }.
Output: 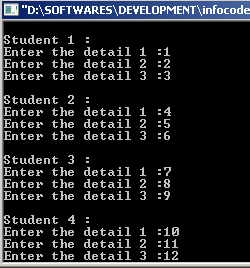 Do you want software consultancy service for your academic or personal projects?
YourOwnCodes (YOC) is ready to help you...!
Kindly contact on  [email protected]