C Program to Swap the Values of Two Numbers

C Program to Swap the Values of Two Numbers

Swapping means the interchanging of two values. There are several ways to swap two values if we look as a little advance like using pointer, using xor etc.

Here we are taking normal and simple method of swapping.

Look at the image: 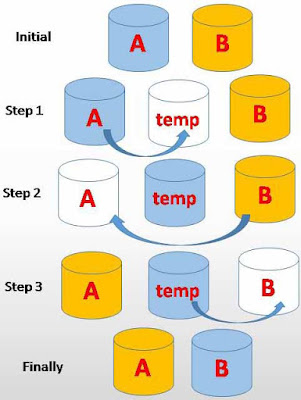 Like this, in C, we use a temporary variable to interchange the value. Let us see the program:

C program to swap the values of two given integer numbers :

Declaring two numbers named num1 and num2. temp is a variable which use temporary value.

Accepting two numbers one by one and saved to num1 and num2.

This shows both numbers before swapping

Now let us look at the values of num1 and num2; values are interchanged. temp has a value of 10. No need to bother, we no need its value.

This shown numbers after interchanging their values.

Above programs leans use of temporary variable and how to use them. If you have any doubts, you may print the values of num1, num2 and temp often in between interchanging steps (using printf).

Feel free to ask your doubts …

Published in C and C Programs