For Loop in C with Example

How For Loop Works in C Programming

Program Abstraction:  This tutorial shows you the basic principles of the major loop concept in C Programming
We learnt already about ‘While Loop’ and ‘Do While Loop’ in previous lessons. Now let us learn another loop; For Loop. For loop is the most popular and widely used loop in programming world. Like the while loop, for loop is also simple and easy to understand.

The general form of for loop is:

Condition:
The value of control variable is tested using the test condition.

Update:
When the body of the loop executed, the control is transferred back to this section, where may has increment or decrement statement.

If you can’t understand above theories, then let us see some examples:

Explanation:
In for loop,

i++;
After executing the body of the loop, then the control return back to this update section. Here i++ increment the value of the i one by one.And return back to the condition section (i<=10).

Above processes continue and the value of i become 10, after executing the body of the loop, i incremented to 11. Now again check the condition, here i is 11, so the condition does not hold. So control goes out of loop and program gets end.

See the working of loop in picture: 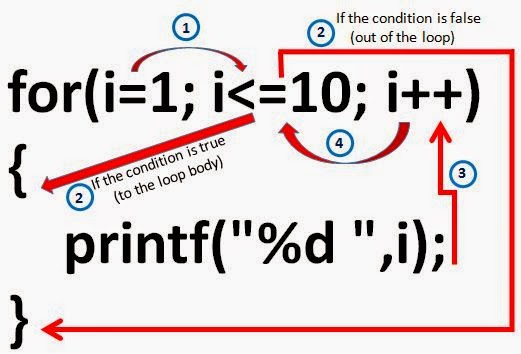 We can declare variables in initialization part.

Also we can use increment inside the loop body.

Program to print numbers in between 2 ranges:

Here both starting point and ending point were accepted and set them as loop’s initial value and ending value respectively.

Program to display odd numbers below 20:

Where i initialized as 1 and i increments by 2.