Declaring and Using a Variable in C

By yourowncodes on 21st December 2013

Declaring and Using a Variable in C

In previous lesson, we learnt how to display or show a text string.
Now let us see how to declare a value and how to print or display the declared value as output.

Let us learn these with an example program:
[In this lesson there are many example programs, you should work with your compiler to understand actual working of codes]

The lines #include<stdio.h>, #include<conio.h> and getch() were discussed already on previous lesson.

printf(“%d”,n); – %d (says module d) is denote a place to display(where to show) a decimal number and n replace the place of %d to display. That is in C, just printf(n) will not produce an output with 10. If you see the code %d inside a double quotes, then you have to think there should be a decimal number to display instead of it. That is the variable (here that variable is n) or  its value (here the value of n is 10) after comma  replace the place of %d.

It prints the value of n, so output will be 10

Another program to declaring two variables, then assigning values to variables and printing each value:

-Declaring n and m as integers.

-Printing the values of n and m. first %d replaces the first value after comma (n), and second %d replaces second value (m). Here value of n is 10 and m in 20.

-Declaring n and m as integers and assigning values 20 to n and 30 to m. 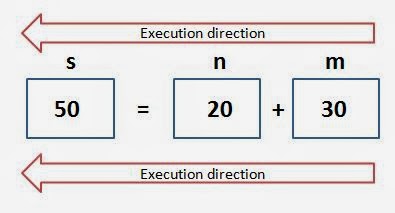 You can do same program without declaring the variable s:

Now you learnt how to declare integer (int) variables, assigning values to them and printing values as output.

Now let us learn how to do above operations on other data types like float, character, etc

You know integer can store only decimal values like 10, 20, 30 but it cannot store real values (fractional numbers) like 10.2, 20.6 etc. Therefore, we use Float data type. The data type float can store numbers with real values (numbers with point). Here we use %f instead of %d in integer.

Working: We used %f, because n and m are float data types. 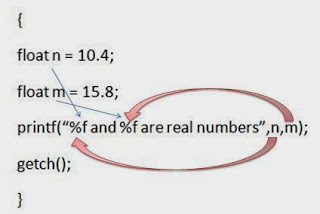 What will be output of this program?

Character is another common data type in C. Character store only single character, it may be letters, numbers, or other characters like *,#, @, &, etc.

In case of character, we use %c for printing.

Program to display a character:

-We use char for declaring a character, ‘b’ is the variable and # is the value assigned to ‘b’. Value of a character variable should in between single quotes.

-Used for printing the character # using its variable ‘b’, here we use %c to locate the printing position of ‘b’.

Program to display my name: 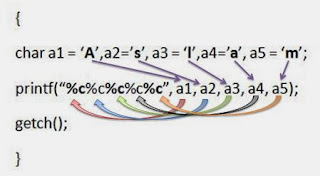 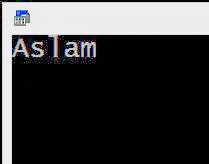 We have to remember these always of our programming…


Here we saw, all programs using a static values (eg: int a = 10;). Can we use dynamic values those are accepted from user during program execution?. Yeah, let us learn how to accept or receive inputs from user in next lesson.

Do you want software consultancy service for your academic or personal projects?
YourOwnCodes (YOC) is ready to help you...!
Kindly contact on  [email protected]